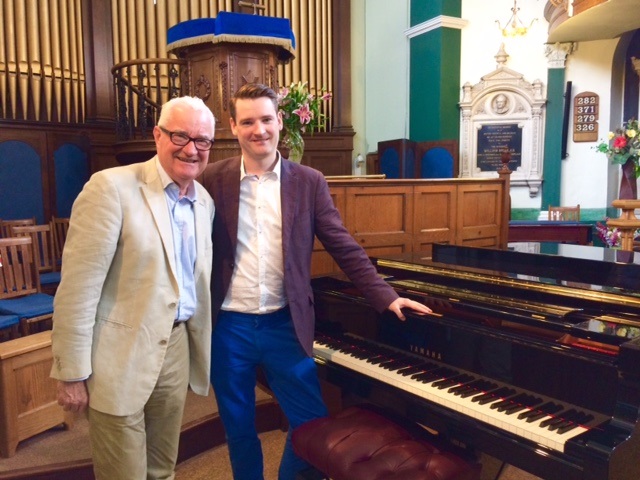 The Ulster Youth Orchestra has announced the appointment of international concert pianist Michael McHale as a new Patron.  Belfast-born Michael joins Sir James Galway and Barry Douglas in the role supporting what has become one of the leading youth orchestras in the UK.

David Smyth QC, Ulster Youth Orchestra Chair, said, “The overall aim of the orchestra is to develop young people through music and to help them achieve their potential musically and personally.  What better role model for our young musicians than Michael McHale, who himself was a member of the Ulster Youth Orchestra and through hard work and commitment is now regarded as one of the leading Irish pianists of his generation.  We are delighted to welcome Michael as our new Patron and are confident that his continuing interest in the Orchestra will be of great benefit to our members now and in the future.”

Michael McHale’s interest in music began at the age of seven when he started learning the piano, soon followed by cello lessons at the City of Belfast School of Music.  Educated and trained at Cambridge University and the Royal Academy of Music, Michael (33) has developed a busy international career as a solo recitalist, concerto soloist and chamber musician.

Accepting the role, Michael said, “I am honoured and delighted to become a patron of the Ulster Youth Orchestra. The orchestra continues to go from strength to strength, and ever since my early days as a member of the UYO back in 1997 and my subsequent appearances as a guest soloist with them in recent years, I have never failed to be inspired and impressed by the enthusiasm and talent of these wonderful young musicians – I am so proud to continue my association with one of the most important and vibrant cultural institutions in Northern Ireland.”

Ciaran Scullion, Head of Music, Arts Council of Northern Ireland, added, “The Arts Council welcomes the appointment of Michael McHale as Patron of the Ulster Youth Orchestra.  Michael is a prodigious talent who brings an enormous wealth of insight and experience to the role and we look forward to continuing to work with the Ulster Youth Orchestra and Michael as they drive forward their vision to enable young musicians throughout the region to achieve their musical potential.”

The Ulster Youth Orchestra brings together the most talented young instrumentalists aged 14-23 from throughout Northern Ireland for residential courses and concerts, CD recordings, special projects, workshops and events.  Musical training is provided by leading professional musicians and distinguished conductors.

This summer the Ulster Youth Orchestra will put on two concerts in the Guildhall, Londonderry on Friday 18th August and in the Ulster Hall, on Saturday 19th August.  With the title ‘Symphonie Fantastique’ the repertoire will include pieces by Copland, Michael Torke, Prokofiev and Berlioz.  See here for more information about Michael McHale.