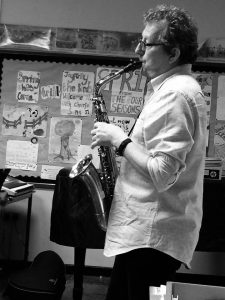 Gerard McChrystal, international saxophonist, was a member of the Western Area Youth Orchestra in the 1980s. Since those early days playing 2nd clarinet he has studied at the Royal Northern College of Music, the Guildhall School of Music and the Northwestern University in Chicago.  Gerard now travels the world performing and coaching, as well as teaching at the top UK music colleges.  Gerard was an ambassador for Derry-Londonderry UK City of Culture 2013 and his album Aria was released by First Hand Records in October 2011.

The workshop, facilitated by UYO, began with the youth orchestra playing a rousing rendition of Star Wars to demonstrate their talents to Gerard and to set the tone for the day, which was learning while having fun!

Gerard spoke to the full orchestra explaining that he once sat where they sit now and as he told his story he passed on great advice from choosing a teacher to how to practice more effectively and the importance of being committed to the exploration of and relationship with your chosen instrument. 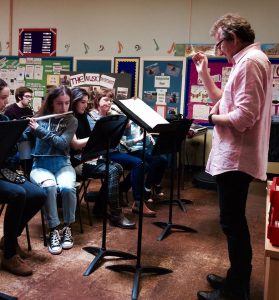 Gerard chose a contemporary piece to perform which demonstrated a wide variety of advanced techniques and experimental sounds, new to the young musicians. This proved to be one of the highlights of the day as Gerard showed off techniques such as slap-tongue, circular breathing, note-bending and using the saxophone as a percussion instrument.  Sectionals followed a short break with Gerard coaching the woodwind and brass through Bizet’s L’Arlesienne Suites which the youth orchestra will perform at their upcoming Spring concert. This was a useful time to learn about listening to each other and improving the balance of the section.  Phrasing and articulation were discussed as they shaped and polished the repertoire.  After lunch the orchestra came back together for full rehearsals.  Gerard joined in with the saxophone section to encourage and empower the young players to play out their solos – particularly the beautiful saxophone solo in the Pastorale movement of L’Arlesienne Suite No.2.

Gerard concluded the full rehearsal by conducting his old youth orchestra – something he enjoyed immensely!

One final treat was in store for the two young saxophonists as they received a short lesson from Gerard – an opportunity not to be missed and something they will always remember. 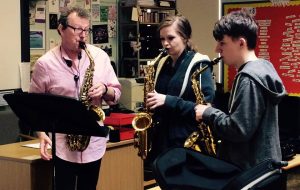 The Ulster Youth Orchestra is dedicated to providing access to excellence and bringing Gerard McChrystal back to where he started was a perfect match which inspired the young musicians as can be seen in some of the feedback gathered on the day:

“I learned that we can use our instruments in more than one way, to their full potential, and to experiment with their sounds.  I learnt to always keep practicing even when I know how to play it, I can always improve.”

“Listening to Gerard play his saxophone was great and listening to him talk so passionately about music was very inspiring.”

“A very interesting insight on the right way to practice and why music is a great profession to pursue.”

“There are more ways to play an instrument that the traditional methods – virtuosic playing was interesting on the saxophone.”

And finally – one from our star performer himself:

“Thanks.  Yesterday was one of the most special days I’ve had in a long time.”